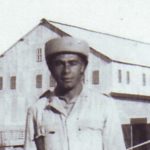 More info: Awarded the Member of the British Empire (M.B.E.) 9.8.45 in Greece.
Captain CRONJÉ was infiltrated into Greece in May 1944. He led his group right through the heart of the country from the west coast into the Pajko area, a distance of some 250 miles over the most mountainous and difficult country. He organised their living quarters, negotiated their food supplies, purchased mules for their column and generally administered his group with outstanding skill and patience. He carried out many reconnaissances of his operational area and the special targets which it contained regardless of his personal safety at all times. On almost every occasion he took part in the actions which his sections fought in the area. His judgement, tactical ability and leadership were outstanding. He maintained the highest standards of discipline and morale among his troops under, at times, the most trying conditions. No one understood better than he the great necessity for the maintenance of so high a standard in the circumstances in which he and his men were living in enemy-occupied country. His great personal energy, his will to succeed, his loyalty to his superiors and his determination to put self last and ensure that what he knew well to be the right military procedure was carried out, made him a leader of the finest type and was the primary cause of the success of the many actions in which his men took part.