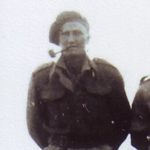 More info: Awarded the Military Cross (M.C.) in Italy 1945.
Lieutenant WELLINGTON, with six ORs, formed an assault party which took part in the attack on a steel three-span bridge. All the credit for capturing the bridge goes to Wellington who recced the area, cleared a gap in the minefield and made the plan for the attack. He led the assault party which stormed and captured the pillboxes, covering the bridge within three minutes of the attack starting. His efforts enabled the Mission Officer with four OGs and partisans to capture the living quarters, lay charges and destroy the bridge. As a result the line was rendered useless for three weeks, six Germans and four Italians were killed and two Germans and three Italians captured together with a comparatively large quantity of arms, ammunition and clothing. During a later period five other bridges were destroyed or damaged, and much sabotage of railway and telegraph lines was carried out successfully.