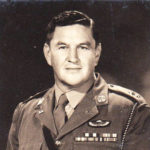 More info: Awarded the Military Cross (M.C.) in the Adriatic 1944
At approx.. 0040 hrs on 22 June a force consisting of 1 x 75 mm Howitzer and crew under Lt. Phillips command and accompanied by a detachment of USSOG was landed behind enemy lines at 8226791 on the PELJESAC Peninsula. The intention to destroy enemy shipping. At 2250 hrs on the 24 June five vessels approached the position. At exactly the right moment Lt. Phillips opened fire scoring a direct hit on the leading E Boat. He then engaged the second vessel, a schooner which contained among other things 20 tons of Amn. This vessel was set on fire and later sank. The final result of the operation was the total destruction of the schooner and two E Boats so heavily damaged that the enemy was forced to beach them on the peninsula.
The success of the operation was almost entirely due to the careful personal recce: previously made of this area in enemy territory by Lt. Phillips and personal direction of the fire control. He set a magnificent example of courage and leadership to his men, during the engagement he personally manned a portable searchlight to light up the target, thereby drawing on himself the enemies fire which would otherwise have been directed against the guns and the USSOG detachments. This was planned beforehand and not done in the heat of the engagement. As a direct result no casualties were sustained by the Raiding Forces. Two prisoners were captured.
In the planning and execution of this operation Lt. Phillips has shown exceptional skill and outstanding personal courage and set a magnificent example to all ranks.