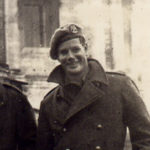 More info: Awarded the Military Medal (M.M.) in Greece 1944.
Sergeant LUSTED, by his magnificent example and devotion to duty, during a period of three days – 27th-29th September, 1944, – helped to hold a most important ambush position against repeated German attacks. It was his personal example that inspired irregular Guerilla Troops to keep steady under heavy enemy Mortar and Artillery fire. Finally, on the third day, when the enemy attacked with overwhelming numbers and broke into our position, Sergeant LUSTED held them up for two hours with one machine gun, while the remaining men of the Section and the Andartes were enabled to make a safe withdrawal. One of his gun crew of two was wounded, and only then did he decide to pull out, getting the wounded man away over the most difficult terrain into safety, and manhandling his gun out after everybody else had got away. By his gallant and determined resistance under heavy fire, he enabled all the British personnel in the area to get away, thereby averting a very grave situation.