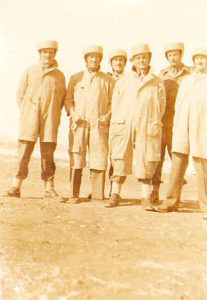 Para training was done initially at Kabrit or Ramat David and then later in Italy.

The first para course involving Raiding Support Regiment men took place on 25 November 1943 at Kabrit and they continued to jump there until 1 April 1944.

Training in aspects of mountain warfare and animal handling was also covered.  This took place at Zgharta in Syria and at the Cedars of Lebanon.